I grew up at an environmental studies centre, so in our house, being scared of spiders wasn’t an option. If I find one now, the only place I run to is the bookshelf to look it up in my battered Collins Insect Guide, handed down to me by my dad. I like snails. And snakes. And frogs. And I’ve loved going for walks in the countryside since I was old enough to well, walk.

But what I was most interested in when I was a kid (and still am today, actually) was fossils.

The centre is in an area known as the North Downs, a ridge of chalk hills which were formed when much of what is now Britain was covered by sea between 97 and 65 million years ago. In that chalk – itself formed out of the remains of microscopic plants and animals – are all sorts of fossils of the animals that used to live in that sea, some preserved in the chalk, some in flint. Which is why, one summer, I found several almost perfect sea urchin fossils sitting at the side of a footpath, where they’d washed out of the soil. 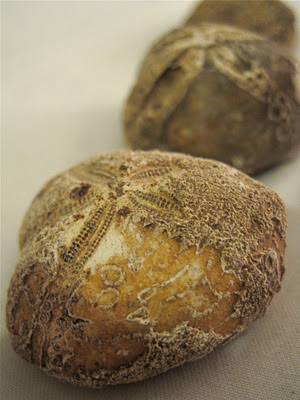 More often, I’d find a lump of chalk with something just visible inside it, which careful chipping away would reveal to be a shell or a belemnite. And sometimes, we’d visit a nearby quarry, long abandoned, where there were shark’s teeth preserved in the chalk. I can't tell you how many hours I spent hammering away at lumps of rock with a geological hammer, only to find… more chalk. Although my sea urchins were beautiful, they weren’t exactly rare. A shark’s tooth would have been, well, special. But it wasn't to be.

Then we went on a family holiday to the South-West. It was a freezing cold December day, and there we were on the beach in Lyme Regis, with horizontal rain and a sea the colour of roof slates. What on earth were we doing? Why weren’t we inside watching telly like sane, normal people?

The reason was that Lyme Regis, which sits on a band of Jurassic-era blue lias clay, even softer than chalk, is one of the best fossil spots in the UK. If you go in the summer, the beach has usually been picked clean, but in the winter storms lash the cliffs, and they slump, and the fossils inside are revealed. 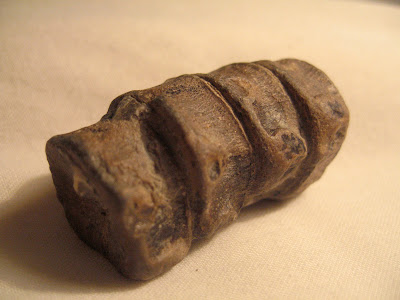 These are four vertebrae from the tail of an Ichthyosaurus, a giant marine reptile that was around at the same time as the dinosaurs. And they were sitting on the sand in plain view.


I never found any more of that Ichthyosaur, even though on subsequent visits, I combed the beach from end to end. But perhaps that’s what makes this fossil so precious – that it's such a unusual find.


And although I didn’t originally intend this post to be about writing at-all, as I put it together it I couldn’t help thinking how ideas can be like fossils. Sometimes, if you’re lucky – and it doesn’t happen often – you’ll just stumble across one, whole and almost perfect. Other times you have to chip away at it to remove all the extraneous stuff around it. If you’re lucky, you finally manage to get at it, but sometimes it comes out broken and mangled and you have hunt for something else.

But it’s thought of those rare, almost-wholly formed ideas that drives me forward with my writing, no matter how difficult or frustrating it gets at times. Who knows? There could be an entire Ichthyosaur buried in there… and I’ll never know unless I keep on looking.


What keeps you going with your writing?


And in other news…

I’m excited to reveal that tomorrow a brand new blog, The Lucky 13s, is being launched – and I’m going to be part of it! I’ll post the link here and on Twitter tomorrow, so look out for it.
Posted by Emma Pass at 06:50