A Dream About A Dog

This is a true story.

It was New Year's Day 2013, just over four weeks since we'd lost The Hound. We'd got through Christmas without him (just) and had agreed that we would wait a while before thinking about getting another dog. We still felt too raw, we missed him too much, and it was going to be a very busy year. Maybe we'd adopt a new hound in the autumn. But definitely not yet (although I had started browsing rescue sites – just looking, you understand).

In the early hours of that morning, I had an unusually vivid dream. My husband, D, and I had adopted a medium-sized black greyhound with white paws and a white splodge on his chest which tapered down to his belly in a lightning-bolt shape. He was quite at home, sprawled on a dog bed in our living room. Not surprisingly, when I woke up, I couldn't stop thinking about him. Later that morning, I had a quick browse of the website of the rescue which we adopted The Hound from: Crossing Cottage, the East Midlands and Nottinghamshire branch of the Retired Greyhound Trust (again, just looking).

And saw this little face looking back at me.

I showed D, almost speechless. This was the dog from my dream. 'Email them,' D said. 'Do it now.'

'Email them,' he said again.

So I did, and an hour later, I had a reply. Apparently, the dog's markings were just as I'd dreamt them, even down to the white lightning-bolt on his belly, and even more spookily, he had only gone up on the site the night before. We were the first people to enquire about him.

We got in touch with the owners, and arrangements were made for them to visit us a couple of weeks later. It went brilliantly – the owners were lovely, and clearly very sad about having to rehome G-Dog (as he's now known for online purposes!), who walked straight in, jumped up, put his paws on D's shoulders and washed his face.

By the time the visit was over, we knew our wait for another hound was over almost before it had begun. On the 26th January 2013, G-Dog came home, and as I type this he's stretched out on the sofa beside me, paws gently twitching. I wonder what he's dreaming about…?

The Clock Is Ticking… Cover Reveal for DARK DAYS by Kate Ormand!

You may have heard me mention my fab writing buddy Kate Ormand's forthcoming debut novel, DARK DAYS, a few times recently (OK, a lot of times). Well, the day has finally arrived when I can do more than just talk about it. Because Kate has had the go ahead to share the cover, and has asked me to do the big reveal!

Here's the blurb from Amazon (where you can also preorder it):

The future world has been divided into sectors—each the same as the other. Surrounded by thick steel fences, there is no way in and no way out. Yet a cyborg army penetrates each sector, picking off its citizens one by one, until no one is left. Behind the sectors’ thick walls, the citizens wait to die. Few will be chosen to survive what’s coming; the rest will be left behind to suffer. A new world has been created, and its rulers are incredibly selective on who will become a citizen. They want only those with important roles in society to help create a more perfect future.Sixteen-year-old Sia lives in one of the sectors as part of a family that is far too ordinary to be picked to live. According to the digital clock that towers high above her sector, she has only fifteen days to live. Sia has seen the reports and knows a horrific death is in store for her, but she is determined to make the most of her final days. Sia refuses to mourn her short life, instead promising herself that she’ll stay strong, despite being suffocated by her depressed mother and her frightened best friend. Just when Sia feels more alone than ever, she meets Mace, a mysterious boy. There is something that draws Sia to him, despite his dangerousness, and together, they join a group of rebels and embark on an epic journey to destroy the new world and its machines, and to put an end to the slaughter of innocent people.

Does that sound good or what? And here – drum roll please – is the cover! 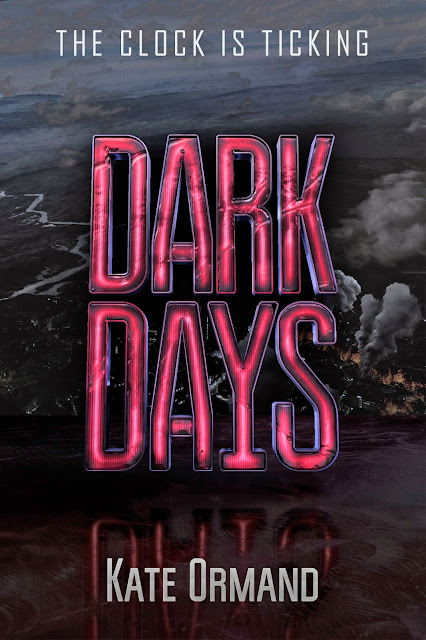 I am so excited about this book. It's out on 3rd June from Sky Pony Press, and if you're a fan of DIVERGENT and THE HUNGER GAMES, you will love it.

Kate Ormand is a YA writer represented by Isabel Atherton at Creative Authors Ltd. She lives in the UK with her family, her partner, and a cocker spaniel called Freddie. She recently graduated from university with a first class BA (Hons) degree in Fine Art Painting. In her spare time, she loves long walks with Freddie, reading teen novels, and painting her nails. Kate is also a member of an online group of UK-based authors and illustrators called Author Allsorts. And she writes children’s picture books as Kate Louise. DARK DAYS is her first novel. You can see more about Kate and her writing by visiting her website (www.kateormand.wordpress.com) or on Twitter (@kateormand).