Dinos and Jungles and Bear Traps, Oh My! 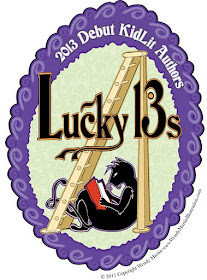 I'm over at the Lucky 13s today, blogging about my first novel, which contained a suicide, two dino attacks, an explosion, a jeep crash, a near-drowning, an earthquake and a landslip… all by page 115! It also had the most dramatic ending EVAH. Find out more here!

Dinos and Jungles and Bear Traps, Oh My!
Posted by Emma Pass at 17:33 2 comments

Last Wednesday was a bit of a special day for me. I'd just got home from work when there was a knock at the door, and I opened it to find the postman standing there with a large padded envelope. My reaction? I tore it from his hands, grinning like a maniac, saying 'I've been waiting for these!'

I'm sure he thought I was completely mad. But I make no apologies. For this is what was inside that envelope… 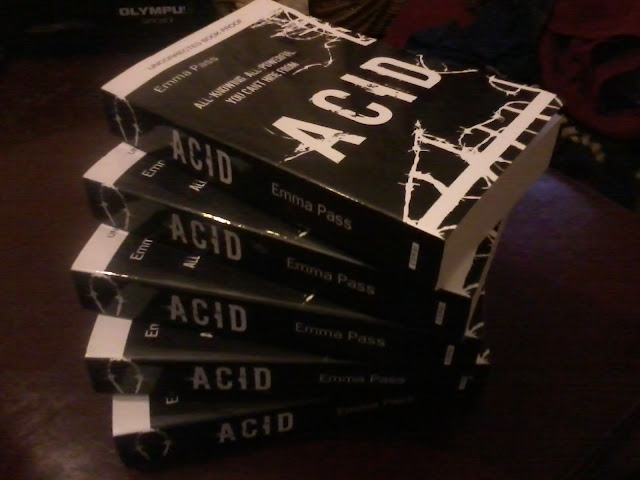 Proof copies of ACID (or ARCs – Advance Reader Copies – as they're known in the US)!

Aren't they gorgeous? This isn't the final cover – I'm hoping to reveal that before the end of the year – but it's so striking. I love it! It feels slightly surreal that, 19 years after deciding I wanted to be a writer, almost 5 years after first writing this story, and 16 months after it sold to Random House, ACID is almost a proper book. A book that people are going to read. Yikes. I think I might go and hide under the bed for a while…

Plus, I have a new publication date! ACID will now be available from 25th April 2013, which means there's just over 5 months to go. Double yikes.

Don't forget, if you're a blogger, bookseller, reviewer or librarian who would like to request a proof copy of ACID, you can do so via the form on my website, or via the page at the top of this blog.
Posted by Emma Pass at 06:00 27 comments

I realised yesterday that I'm long overdue for a 20 Books for 2012 post, and as there's only a few weeks left before the end of the year, I thought I'd better get off my you-know-what and get one written. For anyone who hasn't seen my original post, back in June, I took the Bookstart 20 Books for 2012 pledge and promised to share 20 children's and YA books on my blog. You can see all the books I've talked about so far on this page, and here are the next batch!

When Megan and her family move to Buttercup House, she soon finds a friend in Freya, the girl next door. But a new friend is not the only surprise that awaits Megan; there’s the treehouse, some mice with magical powers, an extraordinary cat and a very special dog called Buttercup. This is a gorgeous book for 6-9-year-olds, or anyone who still remembers what it was like to be that age, about friendship, secrets and the power of using your imagination. I devoured it in hours and can’t recommend it highly enough!

It’s the summer holidays, and Ben and Rachel are bored... until they find a secret vault buried at the bottom of their garden. Inside are the cryonically suspended figures of Polly and Fred, a boy and girl their own age, who were put there by their father in 1956, only for him to disappear and leave them frozen in time. This is a thrilling adventure for anyone who was or is a fan of Enid Blyton, following the ups and downs of Polly and Fred’s adjustment to twenty-first century life, and their search for answers about what happened to their father as they’re hunted down by sinister Soviet officials...

This is possibly my favourite picture book EVER. When Harris goes out to the shops, George, his dog, promises to be good. And he tries – he really does. But there’s the cake... and the cat... and some earth that’s just asking to be dug... You can probably guess the rest. Being a Hound minion dog owner myself, I could really relate to this book and just adored the bright, quirky illustrations, especially on the last page!

Danny lives in the middle of the Australian outback, and last year, his brother was killed in an accident. But nobody talks about it. His fourteen-year-old sister is pregnant, the rains haven’t come and as the annual cattle muster draws near, knowing he has his brother’s shoes to fill only increases the pressure on Danny. Then an English backpacker, hired by his mother to help out, arrives, a secret is revealed, and suddenly, the cracks are too big to paper over any more. This is a funny, gritty coming-of-age YA novel which I absolutely loved.

Jean-Claude Mourvelat – Winter Song
Originally published in France, this book is a dystopian YA with some fantasy elements blended in, set in a fictional country in a wintry, bleak world. A sinister force called The Phalange have seized power, and four teenagers, Milena, Bartolomeo, Helen, and Milos, must escape from their prison-like boarding schools in to help join the fight against the authorities, who killed their parents many years before. I’m not usually a huge fan of translated books, but this had been done incredibly well and I was captivated by the story and the imagery the writing conjured up.

Raphael, Gardo and Rat live on a rubbish site, eking out a living by sorting through the mountains of trash other people have thrown away. Then, one day, he finds a bag containing something which leads him to an exciting and special discovery. But he’s not the only person after the bag’s contents, and soon he and his friends are playing a cat-and-mouse game with the authorities, who will stop at nothing to get what they want. Apparently this novel was inspired by the time the author spent in the Philippines (although it isn’t specifically set there), and gives a real insight into the grinding poverty many people in the real world are forced to live in, yet it manages to be incredibly hopeful.

So, just four more books to go and I'll have fulfilled my pledge. Hurrah! What about you? What are you reading at the moment that's just too good to keep to yourself? Tell me in the comments!
Posted by Emma Pass at 06:55 16 comments

The Five Stages of Writing a Novel (According to The Hound)