A Year Ago Today…

…I was waiting on a piece of news which is simultaneously the most exciting and most terrifying thing an agented but unpublished writer can hear.

My book, which had been submitted to Random House Children's Books a couple of months before, was going to aquisitions.

The acquisitions meeting is where The Decision is made about your book. The decision about whether a publisher is actually going to make an offer for it. Even when the commissioning editors and other teams have fallen in love with your novel, it still has to get over this final hurdle. Of course, I was thrilled to have gotten this far – especially as my previous novel hadn't sold – but it was torture, too. Because the thought that my novel could get so close and yet there was still every chance it might be rejected… well, that wasn't the easiest place to be in.

Even worse, at that point, hardly anyone knew I was a writer – let alone a writer with an agent and a book out on submission that was about to go to acquisitions at a major publisher. So I had to go to work that day and pretend everything was normal, even though inside, I was just about ready to explode. I had to smile at people and make conversation when all I wanted to do was to stare at my computer screen, finger hovering over the refresh button on my email inbox.

Not that I wanted any emails. 'If you hear from me today, it's bad news,' my agent had told me. 'If you don't, it's good.' As soon as I finished work, I rushed home, fired up the laptop and logged on. Nothing. I checked again ten minutes later. Nothing. I choked down dinner. Nothing. Saw hubby off to teach his art class. Nothing. Tried to write a bit more of my new novel. Nothing.

And although I'd told myself I wouldn't get too optimistic – that there was still plenty of time for my agent to email me – I began to feel the first glimmerings of hope. Of what if they said yes?

And then, at about quarter past seven, I checked my email one last time, and saw a message from my agent sitting in my inbox.

My heart sank. At arm's length, I opened the email, the same mantra running through my head that I always repeated to myself when I got a rejection: It doesn't matter. Perhaps the next publisher will say yes. Or perhaps it'll be the next book that sells. You'll only fail if you stop writing. And all the while, disappointment sat heavy inside me. My book had got this far, and they still didn't want it.

But it wasn't a rejection. It was a forwarded email from the commissioning editor. The response to my book at the meeting had been positive. They were going to make an offer.

My book was going to get published.

Okay, I admit it, I cried. I may even have screamed and scared The Hound. And I know I re-read that email about a hundred times, not quite daring to believe it was real. But it was. And it was still there the next day. And the next. This was actually happening.

Now, with all the edits and copyedits on ACID done, and the manuscript waiting to go to the typesetter, I can hardly believe that just one year ago, I had no idea if my dream of publication was still books and years away from coming true. That can be the worst thing about trying to get published, I think – the waiting, the not-knowing, the knock-backs which drain your confidence no matter how much you try not to let them.

But if ACID hadn't sold? I'd still be writing, without a doubt. Because you never know when everything's going to change. And a year ago today, that was what happened to me.

Usually, I chill out on Sundays. Get up late (well, as late as The Hound will let me, which isn't that late, but, y'know), drink coffee, read and generally ignore my to-do list. This time last week, however, found me getting up at stupid o'clock and prising hubby out of bed to drive me over to Matlock, where I'd volunteered to help out at the Big Book Bash. It took a few cups of tea, but I eventually got us both upright with eyes open (sort of), and off we went.

The Big Book Bash, a day of workshops and author talks, has been taking place since 2004 and is aimed at children in care and their foster families. I was there in my day-job capacity and was looking after Annabel Pitcher, author of the amazing MY SISTER LIVES ON THE MANTELPIECE. After meeting my teenage helper Molly I went to help set out the room where Annabel would be giving her talk (which basically entailed trying to figure out how to level a projector with a wonky foot, and hoping the laptop attached to it didn't crash, as I had no idea how to work it). Then it was off to find Annabel and show her to the authors' green room before the Big Book Bash was declared officially open.

Annabel's talk was fantastic - it was so interesting to hear about how she came up for the idea for her book while she was travelling with her husband, and how she started writing it in the middle of the night, and had to tie a sock round his head because she needed the light on, but he was trying to sleep! I can't wait to read her forthcoming novel KETCHUP CLOUDS, which is out at the end of the year.

In the afternoon, I got to sit in on a teenage fiction panel with Annabel and two of my other favourite authors, Phil Earle and Ruth Warburton. The talk was great, and I enjoyed chatting to them afterwards, too (thanks, Phil, for the second-book-nerves reassurance). I came home with a pile of signed books and a huge grin on my face. Events like this are why I love my day job!

So after that, you'd think I'd let myself have an easy day, right? Well, not exactly. Because on Monday I was booked in to do my second ever school visit (you can read more about the first one here). This time it was closer to home, at Brookfields Community School in Chesterfield, where I was doing an author talk and running a workshop for 13 members of their creative writing group. After a warm welcome from head of English Kate Foster, I was taken to the library to meet the group. I started by telling them a bit about how I started writing, and read them the first chapter of ACID. I was pleased with the good reaction it got, as I've read it sooo many times now, I'm starting to wonder how anyone else can possibly find it interesting - I forget that to other people, it's brand new!

After that, we did a warm-up exercise on the theme of 'Lottery'. The scenarios everyone came up with were all so different. One group member even wrote something that had a sci-fi twist, which contained some really powerful imagery.

Once everyone who wanted to had shared their work, we did some work on character building, then had a break for chocolate biscuits (vitally important to the creative process). Finally, I talked about story-writing and got the group to start writing the opening scenes of a story, using the characters they'd created earlier on. Unfortunately there wasn't time for me to hear what they'd written, but the group were loads of fun, and their talent levels were through the roof. A big thank you to Kate and the group for inviting me to talk to them, and I hope I'll be seeing their books on the shelves one day!

Finally, I thought it was about time I added some more books to my 20 Books for 2012 page, so here they are:

SAVING DAISY by Phil Earle
This is Phil's second book and is just as gritty and hard-hitting as his first, BEING BILLY. I remember getting through it in just a few days, desperate to find out what was going to happen next even though I was reading it through my fingers at some points. If you love honest, unflinching contemporary YA fiction, this is definitely the book for you!

MY SISTER LIVES ON THE MANTELPIECE by Annabel Pitcher
Another heart-breaker - you can see why it was shortlisted for the Carnegie medal and has just won the Bransford Boase award. From beginning to end, the story never goes quite where you expect it to, keeping you hanging on until the very last word.

A WITCH IN WINTER by Ruth Warburton
A very different sort of book (and the first in a trilogy - hurrah!), spooky and atmospheric with a paranormal plot. I love that it's set in Cornwall, as I lived there for 3 years, and the descriptions of the towns and landscapes made me feel extremely nostalgic! And I just adore the cover.

POP! by Catherine Bruton
I didn't want to like the heroine of this book at first, but after just a few pages, she'd sucked me in. Set against a backdrop of strikes, and tensions over immigration, this book has one of the quirkiest and most original plots I've ever read. I just loved it!


It's official - I have an author website! Click on the link to take a look - and then come back here and tell me what you think! :) 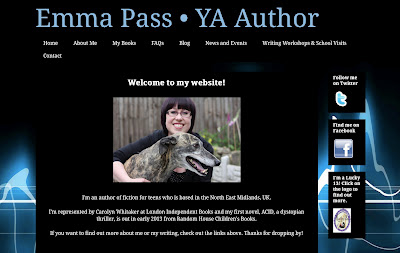 In Which I Have A Mini Photoshoot, And The Hound Has Other Ideas

You may have noticed I have a fab new photo up on the blog (and Twitter!). It's all thanks to the uber-talented Stacey MacDonald, who blogs over at beautebelle.blogspot.co.uk. Last week we did a mini photoshoot in my back garden, and I'm really happy with the result.

However, someone *coughTheHoundcough* wasn't quite so pleased when he found out what was going on…