It was a chilly November day, and as we drove over to the Crossing Cottage Retired Greyhound Trust kennels in Nottinghamshire, fog hung over the fields and blanketed the dips in the roads. The trees were wet and black and leafless. But we were paying little attention to the wintery landscape outside. We were going to choose a dog – our first dog – and could talk of nothing else.

We arrived, met the kennel manager and had a walk around. I didn’t really notice him the first time. While the other dogs flung themselves against the wire fronts of their kennels, barking and wagging their tails, he stood there quietly, patiently, not making a sound. I think I glanced at him, but then my gaze slid away to his more boisterous kennel-mate.

We started meeting some of the dogs. The first had been returned from another home a few days earlier. He was so bouncy and energetic his owner couldn’t cope with making him the fourth addition to her pack. He hauled me up the path and back again, me clutching the lead in both hands. D and I glanced at each other and subtly shook our heads. He was lovely, but not for us. Our first dog needed to be one that wasn’t going to drag one of us under a bus if he saw a cat on the other side of the road.

The second dog was calmer, but there was no spark, no connection between us. He was aloof, and didn’t respond to my touch or my voice. Despite this, he was clearly a steady, sweet-natured animal, so we marked him down as a maybe, and moved onto the third dog.

She was tiny, and so nervous she had never raced. So nervous she wouldn’t even walk with us. I tugged gently on her lead, trying to get her to move, but she’d put on the brakes. I knew we didn’t have the experience to deal with a dog who was so frightened of everything, so sadly, we handed her back to the kennel manager.

“Wait,” she said as we began to wonder if we’d ever find the right dog. “There’s one more I want you to meet. He’s big – really big – but don’t be put off by his size. He’s a real teddy bear.”

And collar and leash in hand, she went to fetch…

She was right about his size. Somehow, when I’d glanced at him before – probably because he was being so quiet – I hadn’t really noticed it. But he came to mid-thigh on her. He had a great square head – much bigger than the other dogs’ – and a back as broad as a table. I started to worry again. Could we really cope with a dog as large as that?

And then he walked up to me. He wagged his tail. He leaned on me, and he looked into my eyes.

“Look at him,” D marvelled. “He’s like a tiger.” And he was. His coat was fawn and red, overlaid with black and charcoal stripes and flecks. His muzzle, paws and chest were splashed with cream, and there was a narrow white stripe, like a chalk line, it on, all the way from his forehead to the end of his nose. And his eyes were gold-brown and ringed with black, the flicks at the edges making him look as if he was wearing eyeliner.

“Here.” The kennel manager handed me the lead. It stayed slack. Only when I moved did he start to walk too, stuck to my side as if by velcro. When I stopped, he stopped, freezing with one paw lifted mid-stride. The only time he broke away from me was to water a tuft of grass at the side of the road, and then he came straight back. The cars thundering past didn’t seem to faze him. Neither did the boxer that threw itself at its garden gate, barking hoarsely at him. By the time we’d returned to the kennels, we knew we’d be coming back the following week to take him home.

The two years since then haven’t always been easy. A few weeks after he came home he developed serious health problems, and the fight to get him well again took almost eleven months. It was terrifying. But somehow, he pulled round.

Our routine has changed drastically, too – I’ve had to adjust to getting up every morning at a time that, previously, I barely knew existed, and both D and I have had to get used to going out for walks in horizontal rain and feet of snow. Our once-lush lawn has turned into a balding sea of mud. Our carpets have a permanent coating of hair.

And you know what? We wouldn’t change a thing. 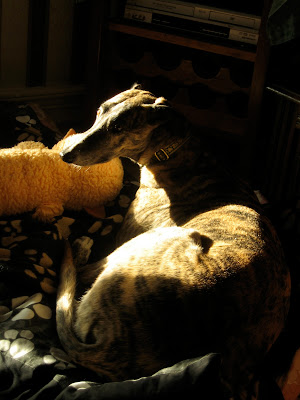 The Hound, Asleep
A liquorice nose.
Long legs tangled, ears and paws
Flickering with dreams.
Posted by Emma Pass at 07:00