Today, I'm talking to Dan Smith, whose (quite literally) chilling THE CHILD THIEF is published today by Orion Books. Dan and I share an agent, and it was she who first introduced me to Dan's books. He's an incredibly talented writer with two other fantastic novels, DRY SEASON and DARK HORIZONS under his belt (you can read my review of DARK HORIZONS here), and I'm thrilled to be interviewing him today! 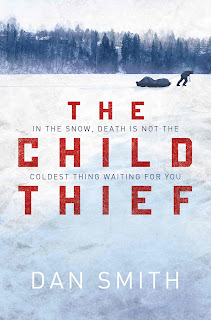 In the snow, death is not the coldest thing waiting for you...


December 1930, Western Ukraine. Luka is a veteran of the First World War and the Russian Civil War. All he wants now is a quiet life with his wife, twin sons and young daughter. Their small village has, so far, managed to remain hidden from the advancing Soviet brutality and labour camp deportations.But everything changes the day the stranger arrives, pulling a sled bearing the bodies of two children. In a fervour, the villagers lynch the stranger, despite Luka's protests. But when calm is restored, the mob leader, Dimitri, discovers his daughter has vanished. Luka is the only man with the skills to find who could have stolen a child in these frozen white wastelands - and besides, the missing girl is best friends with Luka's daughter Lara, and he promises her that he will find her friend and bring her home.Together with his sons and Dimitri, Luka sets out in pursuit across lands ravaged by war and gripped by treachery. Soon they realise that the man they are tracking is a no ordinary criminal, but a skilful hunter with the kidnapped child as the bait in his violent game. It will take all of Luka's strength to battle the harshest of conditions, and all of his wit to stay a step ahead of Soviet authorities. And though his toughest enemy is the man he tracks, his strongest bond is a whispered promise to his family back at home.

Hi, Dan. Welcome to the blog! Tell us a bit about yourself. 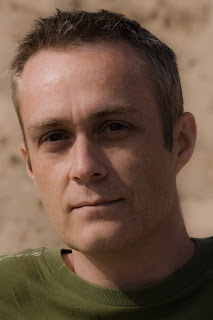 Thank you for inviting me along – it’s great to be here. In the electronic sense, anyway . . .

I’m an author with two published novels so far - Dry Season was out a couple of years ago, with Dark Horizons following it up last year. This year will see the publication of my third novel The Child Thief.

I spent a lot of my childhood travelling the world with my parents which is probably why, when I write, I feel the need to take the reader somewhere they might not have been before. Now, though, I live in Newcastle with my wife and two children, and while ‘The Toon’ sometimes feels like another world, I don’t see myself setting my novels here just yet.

Growing up, I spent a lot of time in places where there wasn’t much to do other than read when the sun went down. In Indonesia, television was awful, and in Brazil the plantation generator went off at nine, so the whole family used to sit under gas lamps and read. Losing myself in fiction was also a great way to escape the regimented humdrum of boarding school, but it wasn’t until I was an angst riddled teenager that I first put pen to paper.

I haven’t always been a writer, but I think it’s what I was always supposed to be.

What made you decide to write thrillers?

I’m not sure I did, really. My first novel was a children’s book, but it’s not great, so is now tucked away in the bottom drawer feeling ashamed of itself. After that I wrote a couple of crime novels before Dry Season came along. The thing is, though, I’m not so sure my books are out-and-out thrillers. Graeme Greene used to describe his novels as ‘entertainments’ and I think that’s a great expression. I want people to read my books because they know they’ll be entertained and get something out of them, not because the books fall into one category or another. All my published novels so far have a thriller element to them, but I hope they have other sides to them too. Having said all that, The Child Thief falls rather neatly into the ‘thriller’ section . . .

That’s a difficult question to answer because I’m not sure when the starting point was. I was a teenager when I decided I wanted to be a published writer but I didn’t do anything about it. I was in my late twenties before I sent anything to an agent and, even then, my attempts were half-hearted – probably due to a lack of confidence. When I started to make a real effort, I think it took me a couple of years to find an agent and within a year of that, I had a publishing deal.

Your third novel, THE CHILD THIEF, is out today from Orion. What’s it about, and what was the inspiration behind it?

I always find the ‘inspiration’ question a hard one to answer. I’m not a planner, you see. I sit down and start typing, often without anything other than a starting image in my mind. For The Child Thief I saw a bleak landscape, a family struggling to survive, and a stranger coming out of the wilderness and into their lives bringing something terrible with him. Then a child goes missing and there is only one man with the skill to find her and bring her home. And what’s more emotive than a stolen child? In terms of the setting, I loved The Road and thought this was going to be my post-apocalypse novel, but it turned out to be Ukraine in 1930. Who knew?

Favourite book? Wow. There are so many to choose from. I love The Old Man and The Sea; it’s such a perfect book. But then, The Go-Between is great, too. And The Road. Oh, and I could read Lord of The Flies again and again (and have). Or maybe it’s The Outsider . . . can I have that many?

This is a tough one to answer too. I’m a sucker for eighties horror films (the cheesier the better) and I have a particular fondness for The Evil Dead, but then I love a good western too - The Outlaw Josey Wales is fantastic. And I re-watched the excellent Apocalypse Now the other day and . . . well, I can quote The Princess Bride almost word for word. I’m so indecisive.

For me, music is a mood thing, but I’m definitely more rock than rap. The Ramones and The Clash are still hanging on from my younger days, but now it’s more likely to be The Killers on the iPod – the whole family can get behind Mr Brightside. Mind you, coming back from London the other night, looking out of the train window as the rain began to drum against the glass, Riders On The Storm was playing on my iPod and it was just the perfect moment.

I used to know a lot of jokes, but now I mostly hear jokes suitable for six year olds. Example – what’s brown and sticky? A stick. Or – and this always gets a laugh from my son – knock, knock, who’s there? Smellip, Smellip who? (you have to say it out loud)

I don’t have any writing quirks other than the need for peace and quiet. I don’t need the pencils laid out just so, or to have my lucky whatever beside me. I don’t need to turn around three times before I start writing, I just need . . . peace. I need to go to the place where the story is happening, and I find that hard to do if I’m surrounded by noise.

I’m lucky, I suppose, because mostly I get the peace I need. During school holidays it’s a little more difficult but it’s not impossible. My children are old enough to entertain themselves, get on with homework etc, and (shh, don’t tell) I love having them around. What could be a better break from writing than a smiling face and a warm hug?

If you could tell your younger self one thing, what would it be?

Don’t be so angry. Stop rebelling. Everything’s going to work out just fine. Oh, and work a bit harder at school.

And finally, what’s next?
Well, that’s a good question. I’m writing, of course – always writing. When one book is finished, I move straight on to the next. At the moment I’m working on a follow up to The Child Thief. This one has similar themes of families being torn apart, people battling against man and nature to find what they’re looking for . . . oh, there might be a touch of insanity, too, and there will almost certainly be dark mystery at the heart of it.

Thank you for such a great interview, Dan, and happy Publication Day!

Want to get hold of a copy of THE CHILD THIEF for yourself? It's available on amazon here. You can check out Dan's website here, and read his blog here. He's also on Twitter and has a Facebook author page.
Posted by Emma Pass at 07:12