Interview with Roy Gill, Author of THE DAEMON PARALLEL

Today, I'm welcoming Roy Gill, whose gripping debut novel The Daemon Parallel was published by Floris in March, to the blog! 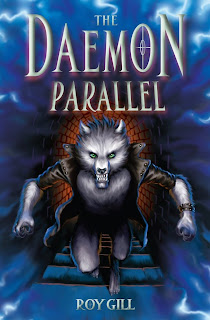 It was over coffee and biscuits that Grandma Ives offered to return Cameron's father from the dead...

Cameron never came to visit his grandma when his dad was alive -- and he's just found out the reason why. Sent to stay with her after his father's death, Grandma Ives soon reveals their family's extraordinary abilities, and introduces him to the dark side of Edinburgh he never knew existed -- the Daemon Parallel. Cameron is sent on dangerous missions in Edinburgh's daemon underworld to find the ingredients for an ancient spell that will bring his dad back to life. Cameron befriends a werewolf, bargains with a giant bat-like beast, and struggles to escape the clutches of a powerful spider daemon. But will he survive long enough to finish the resurrection spell? And who can he trust in a world where nothing is what it seems?

Hi, Roy, welcome to the blog! Tell us a bit about The Daemon Parallel.

It's about a boy whose father dies, and he's sent to live with his gran. She sits him down with coffee and biscuits, and very calmly offers to bring his dad back from the dead - and that's what starts him off on a very strange and dangerous adventure! There's monsters, plot twists, scares and hopefully some laughs along the way too...

The Daemon Parallel is my first novel, although sometimes it feels like my second or third - it took a while to get it right! It was published earlier this year, and it's still seems a little unreal that people can walk into a bookshop and buy it.

How did you come up with the idea, and what was your journey to publication with the book like?

The original idea came to me in a particularly vivid dream. I dreamt about a boy - Cameron, my central character - staying with his gran in Edinburgh (I'd often done the same when I was small). The city outside her house was both familiar and unfamiliar - like a dark, twisted version of the Edinburgh I knew. He had to go on a dangerous journey through these streets, and when he got back to his grandmother, she didn't seem that pleased to see him! I knew there was something odd about her - she wasn't a traditional granny figure (and not very like my own gran at all).

The dream stayed with me, but it was only when I started asking myself questions about it that I realised it could be the beginnings of a story. I wanted to know what had happened to the city - and finding the answer to that took a while! More importantly, I needed to know what kept Cameron with this strange woman - why did he live with her, and what hold had she over him? That gave me the extraordinary offer - to being his dad back from the dead - that kicked the whole story off!

I also knew right then how the story ended...

The first chapter was written pretty quickly, and - amazingly - stayed largely the same through all the different drafts, right up to the published book. As for the rest - some of it came more easily than others!

The journey to publication was quite a long and complicated one... There were probably five years between starting the first draft, and signing the contract to be published (although I wasn't working on Daemon Parallel continuously). During that time there were several opportunities, and several false starts, but I kept plugging away, and hopefully developing and getting better...

A New Writers' Award from the Scottish Book Trust in 2009/10 put me in touch with a mentor, Lindsey Fraser (who is now also my literary agent). She in turn suggested I submit my manuscript for the Kelpies Prize, which is an annual award for new children's fiction. I was one of three writers shortlisted, at a prize ceremony at last summer's Edinburgh International Book Festival. The prize was a cheque and publication, so tension was running pretty high, I can tell you! Although I wasn't the overall winner, the publishers offered contracts to all three of us. Once I'd finished jumping up and down, I said yes - very quickly!

Did you have to do any research for the book, and if so, what sort?

The book is set in same city I live in, so a certain amount of research involved walking about the streets, thinking about locations I could use, or re-work into a daemonic parallel version! I also read a lot of local history and folklore. When it came to using my research, I would quite shamelessly bend the facts to fit the story if necessary - because the story was the goal, not a travelogue or history lesson. I quite like the idea that the world and characters of the finished book is a mad mixture of the real, the unreal and the re-invented.

How and where do you write? And do you have any superstitions/rituals/lucky charms etc?

I find blank screens don't encourage creativity, so at the start of a story (or chapter or outline or whatever) I like to go for a walk with a notebook, and write things down as they occur to me. I write a fair bit by hand (not very neatly, and with lots of crossing out and arrows) before switching over to the computer. It gets printed out, and scribbled over again, then it's back to the Mac. This goes on for some time!

I used to write directly onto screen, but believe it or not, I found that slower. There's a terrible urge to continuously tinker and improve when you've got the editing facilities in front of you, rather than just writing. It's an odd, ramshackle system, but it's the one that works for me!

I'm largely superstition free - I don't have to have a particular colour pen, or type of notebook or anything. As to ritual, there's usually lots and lots of tea. And I'm probably listening to music, especially if I'm editing. There's a certain St Etienne album that's got me through looming deadlines ever since university, and still works its magic now...

If there was one writer, alive or dead, who you could ask anything, who would it be and what would you ask them?

I'd ask John Masefield why he went with that 'it was all a dream' ending to the otherwise amazing 'Box of Delights', and would he mind changing it?

On second thoughts, it seems a bit of a cruel and unusual punishment to whistle-up a long-dead author and compel them to perform a copy-edit, so maybe I should pass...

What is your favourite…

Courtesy of the late, great Alan Plater (from his book, Oliver's Travels):
There was once a farmer who had a horse. His neighbour admired the horse and offered him ten pounds for it. The farmer accepted the offer.
However, before they shook hands on the deal he said to the neighbour, "I should warn you: this horse has one serious weakness: he likes to sit on eggs. So whatever you do, keep him away from eggs."
The neighbour said yes, he would keep the horse away from eggs. So the deal was struck, the neighbour paid the money, and took the horse away.
A week later, the farmer heard loud cries coming from the river. He went down to the river, and there was his neighbor, on the horse, in the middle of the river.
"He won't move," said the neighbour. "We've been here all morning."
"I'm very sorry," said the farmer. "I should have warned you. I told you that he likes to sit on eggs, but I forgot to tell you that he also likes to sit on fish."

And finally, what's next?

Ah ha! That's under discussion... I have two WIPs; a YA fantasy novel and a quirky novel for adults called "The Swimming Pool Rules". And I have a very clear idea of what happens next to the (surviving!) characters from The Daemon Parallel (whoever they might be...). So if enough people want one, there may one day be a sequel...

Thank you, Roy! I'd love to read a sequel, so fingers crossed… 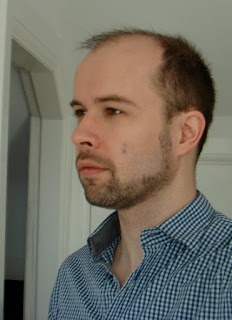 Roy was born in Edinburgh, and grew up in Kirkintilloch and Kirkcaldy. He's performed his writing at many venues, including Aye Write!, On the Rocks and the Edinburgh International Book Festival. The Daemon Parallel is his first novel - it was shortlisted for the 2011 Kelpies Prize, and was published earlier this year.

You can find him on Twitter (@roy_gill) and on his website.
And you can read an extract of the Daemon Parallel here.

The Daemon Parallel is currently Book of the Month on the Scottish Book Trust website, and if you're quick you can enter a competition to win a copy! Click here for the link.
Posted by Emma Pass at 22:51