Hello! I've been so busy recently, this blog has been getting a bit neglected. Sorry, blog. It's not you, it's me. Really.

You might remember my last post about the Totally Random Blog Tour with Amy McCulloch and Karen Mahoney. Well, it was fantastic! The Goodreads and Facebook chats were my favourite bits - I loved finding out more about Karen and Amy's writing processes, and we were asked some great questions on Facebook.

A few weeks ago, I took part in Literally Coventry Literature Festival. In the morning, I gave a talk at Tile Hill Wood School - my first talk ever, so I was very happy that no-one fell asleep or threw things, and that the students asked loads of brilliant questions at the end. Even better, my PowerPoint worked! Then I was whisked off to Coventry library for lunch and had time for a wander round and a look at the cathedral before being taken to King Henry VIII School to run a writing workshop. It was a lovely day, and I'd like to say a huge thank you to Joy Court and everyone involved with the festival, the staff at the library and both schools, and especially to Tracy and Sophie Lynch for looking after me so well. 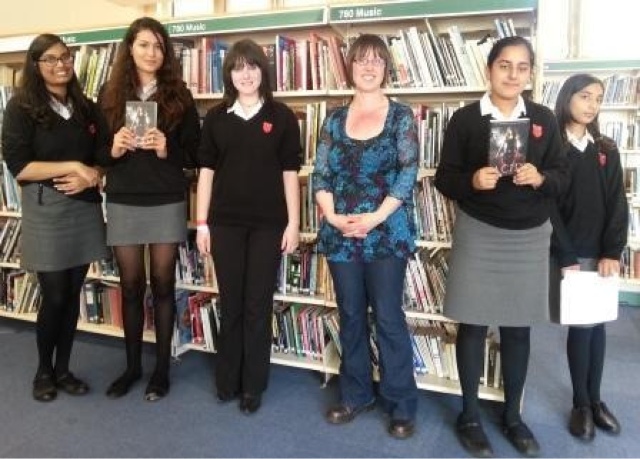 Next up was a workshop and talk for the Teen Book Group at Chesterfield library. They produced some great work, and I really enjoyed chatting to them about writing and books!

After that, I led a day of novel writing workshops at Alfreton Library for Derbyshire County Council and Writing East Midlands. I was a little nervous as it's the first time I've done anything like this, but the day absolutely flew by, and I was so impressed by the standard of work that everyone produced.

I also did a panel at Ashbourne Library with INFINITE SKY author CJ Flood, which was chaired by former Derbyshire Poet Laureate River Wolton. It was a fun evening and we were asked some really interesting questions about our work and what it's like to be debut authors.

Then, this week, it was off to Brookfield Community School in Chesterfield, where I led 3 workshop sessions for Year 9 through to 6th form. I've done some work with the school before, and once again was struck by the enthusiasm of the staff and pupils, and the commitment the school have to nurturing creativity.

I've also recently found out that ACID is going to be an audiobook - squee! It will be released as an audio CD and download from The Listening Library on 11th March 2014, which is also now my official release date for the US edition of the book... which is going to be a hardcover! Double squee!

And FINALLY... Since before Christmas, I've been helping Cathy Grindrod, who's been writer in residence in a school in Nottingham for a charity called First Story. First Story place writers in secondary schools where they run after-school writing clubs, which results in the work the students produce during these sessions being published in an anthology. The whole experience has been brilliant, and last night, the school launched their anthology at Waterstones in Nottingham. It was a proud moment to see the students get up to read their work - they have worked so hard, and sharing your work with a room full of people takes a lot of courage, whatever age you are. I'm not ashamed to admit that afterwards, I got a bit emotional and had to go and hide in the loo for 5 minutes to compose myself!

Actually, that's not quite it, because before I go, I have to tell you about a fantastic book I read recently. It's called MY FRIEND THE ENEMY and it's by Dan Smith, who's already written three thrillers for adults, DRY SEASON, DARK HORIZONS and THE CHILD THIEF. Now he's turned his pen (or rather, his laptop) to writing for children, and if this book is anything to go by, I predict that by the end of the summer, Mr Smith is going to be well on the way to world domination… now that's a scary thought. 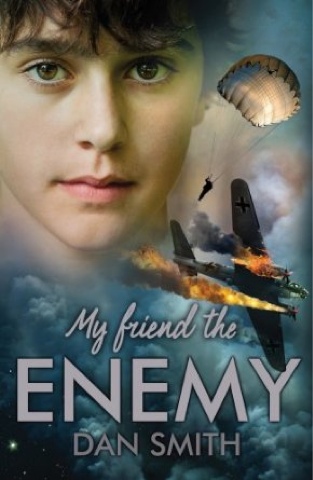 Anyhow, the book is out from Chicken House today - hooray! - and here's the summary from Amazon:

Summer, 1941. For Peter, the war is a long way away, being fought by a faceless enemy, marching across places he's never seen. Until the night it comes to him. A German plane is shot down over the woods that his Dad looked after, before he went off to fight. Peter rushes to the crash site to find something exciting to keep. But what he finds instead is someone: a young and injured German airman. The enemy. Here. And in trouble. Suddenly, helping him seems like the right thing to do.

This book opens with one of the most thrilling opening chapters I've ever read. I loved the main characters, Peter and Kit, and found the depiction of their developing friendship touching and realistic. The character of the German airman, Erik, was also skilfully drawn. The book has obviously been thoroughly researched, but the story is so well told that the historical details fit seamlessly, never getting in the way. The pace is fast and the writing vivid and exciting as the plot twists and turns all the way to the nailbiting finale. MY FRIEND THE ENEMY reminded me of a childhood favourite, Robert Swindells's THE MACHINE GUNNERS, and I'm sure young and adult readers alike will love it.

If you want to read more about Dan, and why and how he wrote the book, head over to Author Allsorts, where you can read my book birthday interview with him.