Happy Book Birthday to Roy Gill and Werewolf Parallel! I've been waiting impatiently for this book to come out – the first in the series, Daemon Parallel, is a favourite of mine and I couldn't wait to find out what happened next. 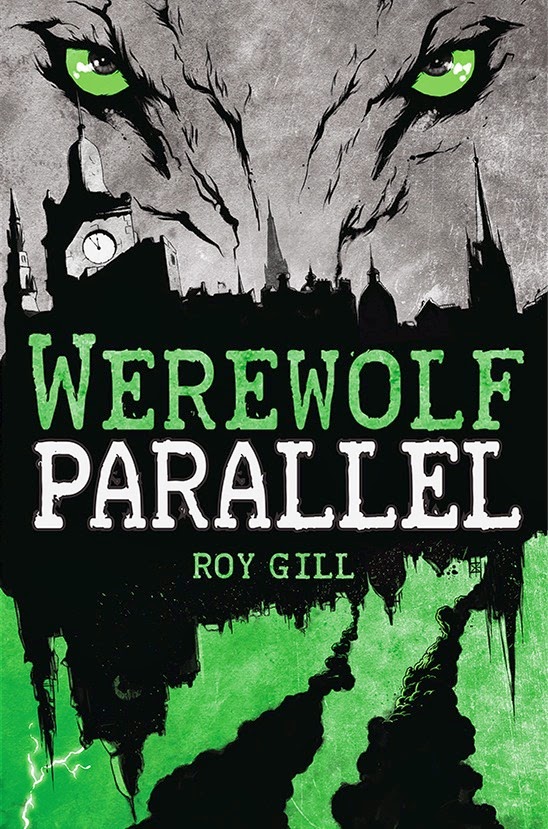 "The wolf is woken..."
Cameron's life of shifting between the Human and Daemon worlds is under threat.
Two sinister figures want to destroy the Parallel - the realm between the worlds populated by daemons, dark creatures, old gods and werewolves - and everyone in it.
To save the Parallel, Cameron must make the ultimate sacrifice, but what is he prepared to lose?

After the lifechanging events of Daemon Parallel, things have returned to normal for Cameron – well, as normal as they can be when one of your friends is a werewolf, the other is a girl who was once the prisoner of a sinister daemon, you're running a business that trades artefacts between the human and Daemonic worlds and, at will, you can cross over into a realm known as the Parallel, a void between the two worlds where anything could happen, and frequently does. Oh, and you're now a werewolf yourself, too…

But Cameron's routine is about to be rudely broken. One day, a pair of sinister visitors arrive at the shop and Cameron, Morgan and Eve realise they must fight for what is theirs – a fight that turns into a battle to save the Parallel itself as a sinister plan is uncovered that could cost Cameron everything he holds dear.

I adored Daemon Parallel, but I loved Werewolf Parallel even more, if that's possible. The writing is sharp, gripping and darkly funny, and the magical world hidden just beneath the surface of modern–day Edinburgh is brilliantly realised. Some of the descriptions are wonderful and, in the case of one particularly revolting character, wonderfully disgusting (almost Dahl-esque, in fact): A strange sickly odour, like mushrooms cooked in sugar, hung in the air. *shudders deliciously*

I love the use of myth in Werewolf Parallel, too – one of my favourite chapters features Janus, the Roman god of beginnings and endings. But what captivated me the most about this book was the page-turning tension created by dilemmas Cameron, Morgan and Eve face. Sometimes books that are packed with action suffer a little on the character front, but this is most certainly not the case here. Cameron, Morgan and Eve are all hugely believable and sympathetic and at various points, I was reading through my fingers, praying everything would turn out alright for them… though whether they do or not, though, I'm not saying. You'll have to read the book to find out!

It's hard to say much more about Werewolf Parallel without giving away major plot spoilers, but if you're looking for a magical read with the perfect blend of mystery, excitement, humour and tension – a read which will keep you turning the pages well into the small hours of the morning – this is the book for you. I urge everyone to get their paws on a copy now!

Head on over to Author Allsorts to read my book birthday interview with Roy, and find out more about how he wrote WEREWOLF PARALLEL!

Roy Gill was born in Edinburgh, grew up in Kirkintilloch and Kirkcaldy, and studied at Stirling, Strathclyde and Glasgow. He is now living in Edinburgh again.

In 2008, having completed Glasgow University’s Creative Writing MLitt, he was shortlisted for the Sceptre Prize.  In 2010 he was the winner of a New Writer’s Award from the Scottish Book Trust.

The manuscript of his first novel, Daemon Parallel, made the shortlist for 2011 Kelpies Prize. It was then published by Floris Books in 2012. A sequel, Werewolf Parallel – alongside a new edition of Daemon Parallel - will help launch the YA imprint KelpiesTeen in Spring 2014.

In another life, Roy researched media fandom at Stirling University, but is now happier making up his own stories…

He is currently working on more scripts and a third novel.