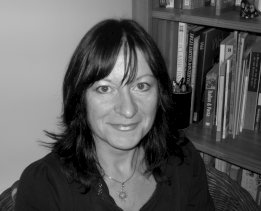 This week, I’m thrilled to be doing my first ever author interview with my lovely writing friend and fellow Hound minion Abi Burlingham. Abi is the author of the RUBY AND GRUB picture books - RUBY AND GRUB, GRUB IN LOVE and the forthcoming GRUB’S PUPS, out next week! Gorgeously illustrated by Sarah Warburton, they're published by Piccadilly Press, who are also publishing her BUTTERCUP MAGIC series for 6-9-year-olds, with the first book, A MYSTERY FOR MEGAN, out next spring.

So, Abi, tell us a bit about yourself. (Ooh, that sounds proper interviewer-y, doesn't it? *Adjusts microphone*)

Well Emma (ha ha! you see I can do it too), I live in Derbyshire and teach adults literacy, but mostly, I write. I'm a huge animal lover - all of them, and regularly cry at nature programmes. I love trees and woods and growing things, especially potatoes - there's something so satisfying about planting a spud and then digging out a whole load with your hands. I love the sea, and am a compulsive picker upper of bits of wood and pebbles. I like to draw and paint too, but have less time for this than I'd like. Mostly, I love to write, just love it. It feeds my soul and if I can't do it I am a total and utter misery guts!

My first memories of writing were from when I was around nine I guess.  I used to make up rhymes and 'odes' all the time. My mum liked poetry and would buy me funny poetry books, which I loved. I used to pore over her Cecily M Barker 'Flower Fairies' book, and 'The Butterfly Ball'. Then I asked for a portable typewriter for Christmas. I was lucky - I got one. It was in a gorgeous dark green zip up case and I adored it. I would sit and type letters from people who didn't exist to people who didn't exist - often very funny and very quirky. They make me howl when I read them now. After that, I wrote poem after poem, often accompanied by drawings and sketches. I think the 'why' bit is harder. It always felt right.  Also, I was painfully shy as a child and would clam up in front of people. The words were all inside and writing was their way out.

What made you decide to write for children?

I didn't have a compulsion to write for children at any point, until I'd had my son. I had left my job - I worked in admin for a long time - and moved to Yorkshire with the sole purpose of writing, then I had my son. I was surrounded by baby stuff, mushy food being flicked onto walls, nappies thrown into a corner of the room in haste, the constant drone of Teletubbies and Postman Pat. I also had two dogs at the time - a whappy cairn terrier and our lovely springer spaniel pup, so I was suddenly in a very crazy place, not at all conducive to writing poetry. I am very quick at making decisions and tend to stick to them, so I decided to write some stories for young children and to research the whole process. Unlike many writers, apart from having to write at school, I had never even attempted a story. I had only ever written these whacky letters and poetry. All Grown Up, my first picture book to be published, was one of the very first stories I ever wrote.

Between the first stories being written and the first book being published, it took four years. I wasn't working regularly at it because by then I'd had my daughter too, but I had received some really good feedback from a handful of publishers, so kept working away at ideas and trying things out. One particular commissioning editor for a big children's book publisher would spend half an hour or more talking me through ideas and ways of trying things, on regular occasions. She gave me the bit of self-belief that I needed in order to carry on.

Ooh, I love this question. It would be hard to say an absolute favourite, but if push comes to shove, 'The Book Thief', by Markus Zusak. I love his writing with a passion, and this book has it all for me. This is the book I would love to have written.

What about your favourite film?

Philadelphia Story, starring Katherine Hepburn, Cary Grant and James Stewart, to name but a few. I love the old black and whites, and the old actors, the way they spoke, the chivalry, the wit. It must have been 'grand' to be a teenager then. 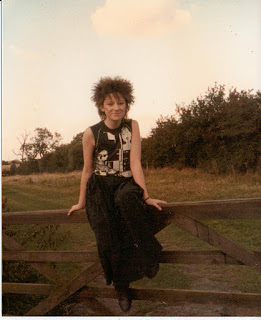 Ah! I used to be a punk - secret's out now. I had the back-combed hair and the weird clothes. In fact, I used to make quite a lot of my clothes from charity shop stuff that I butchered until they resembled something I quite liked. My favourite bands then were people like The Cocteau Twins, The Comsat Angels, The Cure, The Chameleons (I seemed to like bands beginning with C for some reason). But I was also brought up on Roxy Music and David Bowie, Simon and Garfunkel, 10cc, Elton John and The Who. All of these I still love to listen to. At the moment, I have The Horrors 'Skying' on constant replay on my car CD player. I like Arcade Fire, Editors and am a huge fan of Elbow. I also love Sigur Ross and one of my new discoveries, The Black Atlantic, who are from The Netherlands. As you can probably tell, I am a big music fan - music wins over tv for me any day.

And (because I’m nosy and I just have to know!) your favourite joke?

I am rubbish at remembering jokes. I have two - one isn't repeatable here, the other is: What's brown and sticky? A stick. The only reason this is one of my faves is because it's the only one I remember that I can repeat. Mostly, I just like it when people say random funny things that make me laugh.

This is a very good question, because my perfect writing day hasn't happened yet. My perfect writing day would be among the trees in a favourite part of Clumber Park, where no-one else seems to go, or in a wood, just me, a notepad and pen, a big bag of crisps and some water. Otherwise, I guess a day at home where all the words come and I have few other things to do, is fairly close to perfect.

My actual writing day is punctuated by doing the school runs and walking my greyhound, washing up, and of course, The Evil Menace of Distraction... commonly known as Twitter. Not to mention, answering emails, doing publicity stuff etc etc. I imagine it's much like most writer's days really when we do a bit of writing in the gaps between other things. I am lucky though as I only work 3 half days a week, so at least I can settle down for longish spells and get quite a lot done in that time.

If you could tell your teenage self one thing, what would it be?

This is a bit uncanny actually as I had a conversation with someone today about this very thing. I did tell my teenage self something, and would tell myself the same again. I was painfully shy, and I realised that I'd never get anywhere being like this, so I remember telling myself that it was about time I got a grip and pulled myself together. I can't say it was easy, but I was determined that I wasn't going to end up doing nothing with my life and I knew that my shyness would hold me back. I was bullied quite a lot at school but it gave me a steely determination which has stayed with me and always makes me come up fighting.

And finally, what are you up to next?

At some point I would like to sleep and have tea and toast in bed... but before that, I have Grub's Pups coming out on 27th October and am having my first ever book launch for that, which is really exciting (and a tad scary!).  I've written the first of a series of books for 6-9yrs, Buttercup Magic, and the first of these, A Mystery for Megan, is out in April 2012. This means I have two more to write. I'm also working on a couple of picture book stories, another 6-9yrs novel about a rescue greyhound, a 9-11yrs novel about about a girl who aspires to be someone special, and my first YA book. I have also started a novel. Oh, and a poem or two inbetween. I've two poems due to be published in magazines soon, which I am ecstatic about. Hopefully all of this will be punctuated with feasts of cheesecake and fish-finger and fried egg sandwiches... hopefully!

And can I just say, thank you so much for interviewing me. This is my first ever interview, and these have been lovely thought provoking questions. I've really enjoyed thinking about them and I hope people enjoy reading my answers.

Thank YOU, Abi - it’s been great to interview you and I'm sure they will!

Abi has a fantastic website, and a blog which she updates every Friday - you can find both of them here.

GRUB'S PUPS LAUNCH
If you are in the Chesterfield area on Saturday 29th October, Abi will be at Waterstones on Vicar Lane at 11am to launch Grub’s Pups. She'll be reading from and signing her books, and there'll be refreshments, colouring, lollies and free Ruby and Grub bookmarks for the children (I might have to pretend to be a child so I can get one!).