Do You Remember the First Time?

Happy new year! I hope it's treating you well so far. How can it be 2012 already? 2011 seems to have gone past at a crazy speed, and when I think back to this time last year… well, ACID wasn't  out on submission yet. I didn't have this blog. I wasn't on Twitter, and hardly anyone even knew I was a writer.


It's mind-boggling to think how much things have changed in the last twelve months, so I suppose it's inevitable that I've been thinking about where it all began.


I was 13. It was a Saturday in early September, and I’d just been shopping in town with my mum where, instead of spending my pocket money on chocolate, I’d bought a 300-page shorthand notebook with a bright yellow cover, and a black Crystal Bic biro from John Menzies. On the way home, we stopped at a garden centre. While my mum went in, I stayed in the car and took the notebook and pen out of its bag. I opened the notebook, breathing in the faintly sulphurous smell of the smooth, blue-lined paper inside.

Then I uncapped the pen and began to write my first ever novel.

It was inspired by the film JURASSIC PARK, which I’d seen a few weeks before – you can read more about how that film made me realise I wanted to be a writer over at the Lucky 13s blog here – and was a thriller about a policeman and a scientist who go to search for real live velociraptors in the rainforests of Central America. After a jeep crash leaves them stranded (but miraculously unhurt), they find themselves fighting to survive, stalked by bandits, poachers… and, of course, lots of very hungry raptors.

I can still remember the overwhelming sense of excitement I felt when I was writing that story. Because it wasn’t just a story – it was a discovery. As soon as I started it I knew this was what I wanted to do with the rest of my life, and – without meaning to sound melodramatic – it was a revelation. One that changed my entire world.

I wrote my story before school. I wrote it after school. I even wrote it at school, hiding my notebook under my work during maths lessons – and, somehow, managing never to get caught. The words stacked up; I daydreamed about sending it off and becoming a Famous Published Author.

Luckily, I realised it wasn’t good enough before I got to the sending-off stage – it was only 175 pages long, for a start. As it turned out, I wouldn’t start submitting stuff to publishers for another decade, and it would be eight more years before ACID sold. But to this day, I only feel comfortable making notes or writing longhand with a black Crystal Bic (blue ink – forget it!). And If I write in a notebook, I much prefer it to have blue lines rather than grey or black (or any other colour for that matter). I’m still obsessed with the smell of paper, and I’m still horrible at maths.

And I still have that novel. The notebook’s showing its age now – the cover’s come loose, and several pages are held in with staples – but I don’t ever intend to throw it away. It’s a precious reminder, on days when the words are slow, of just how much fun writing can be. 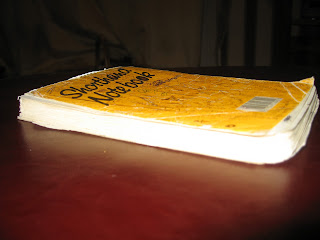 I’ll leave you with the opening paragraphs (completely unedited, I promise!)…

Apryl Carson stretched lazily, yawned and adjusted the striped beach towel that she was lying on. The blue sea stretched as far as she could see with gentle waves breaking on the hot white sand. Palm trees waved their branches in the warm breeze. Costa Rica was the perfect place for a holiday, Apryl thought. She pushed her sunglasses up onto her head and glanced at the newspaper in her hand. Perfect it might be, she said to herself, but it was also very bo– Something caught her eye, a sudden, but careful movement in a cluster of palm trees to her right. It was something big. At the same time, Apryl smelled a terrible stench of decay and heard a snuffling, scratching sound. She closed her eyes momentarily, trembling with fear. The beach, which had seemed so pleasantly empty a moment before was now frighteningly deserted. She wasted no time in gathering up her towel and bag. She could hear her frightened, rapid breathing and her heart was beating so fast it deafened her. The movement again, and it appeared to be nearer, then another, Apryl’s head whipped around, her eyes fixed on the huge head…
No-one witnessed her death. Apryl had a breif vision of six hurtling bodies, the gaping jaws, the pain, the smell… It was all over before she could even scream. One of the animals lifted it’s enourmous head and looked around with huge golden eyes. It was bigger than the others. It growled, and as if on cue, the other 5 dragged Apryl into the trees and fell to eating her with a savage snarling. A trail of blood stained the white sand and dried into a dark brown crust almost instantly, and nearby lay a striped beach towel and shoulder bag, torn to shreds by massive claws.
Posted by Emma Pass at 06:59